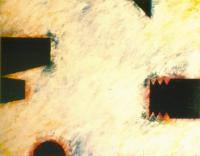 1988 "Spare, even gaunt, these unbending works are not for casual inspection but rather demand and deserve the contemplation and concentration that has gone into their making". Desmond McAvock, Irish Times, 20th April.

1988 "Walsh is technically adroit and rigorously methodical, and the motifs have a curious resonant power..." Aidan Dunne, Sunday Tribune, 1st May.

1989 "Walsh's 'Arena', which marks both a moment of continuing evolution and a decisive change in his work, shows him to be in the mainstream of a diverse and thriving tradition, and it perpetuates the living vitality of non-objective art through its questing, interrogative nature". Aidan Dunne, 'The Arena Paintings 1987-1989', (catologue), Limerick City Gallery of Art.

1995 "Samuel Walsh has made difficult choices in his art project. The work presents both philosophical conviction, a density that has worked through to the point where a hard-earned starkness informs the image. His agenda now includes the harmonics of emotional order. The meeting, a timely risk, promises well". Brian Coates, Irish Times, 27th April.

1997 "This is unusual and highly accomplished work, in a catagory all of its own". Allanah Hopkin, Sunday Times, 23rd March.

1997 "His own drawing has an interesting quasi-architectural character, and his abstract painting has developed in qulaity and authority". Dorothy Walker, Modern Art in Ireland, Lilliput Press.

1999 "Walsh's work usually brings to mind concepts of rationality, control and precision. But the idea of chaos is an essential component of his painterly world". Aidan Dunne, Irish Times, 5th May.

1999  "The paint is applied with a palette knife, energetically swirled and scraped onto the background surface or rendered in little dabs or smears to construct the objects themselves, which creates a rich surface texture and yet another dimension." Marianne Hartigan, Sunday Tribune, 9th May.

2000 "His particular vision of the world continues to prioritise the marginal over the central. It persistently retrieves for consideration and pictorial transformation what might otherwise be overlooked. It is at heart an examination as well as an exaltation of what the artist refers to, with disarming simplicity, as 'the edges and ends of things'." Caoimhin MacGiolla Léith, 'Drawings 1982-2000', (catalogue), University College Cork.

2003 "Colour itself has also varied across the series, bold and unequivocal primaries in some paintings, muted and neutral in others. The latter are not arrived at by pure mixes but through the layering of softer tones over pure hues; with encaustic on occasion lending texture and substance to the surface." "Against the rich hues and their muted cousins we find the pervasive, menacing presence of black, which Walsh treats as a colour itself, rather than a tone." Mark Ewart, 'Ambit', (catalogue), Limerick City Gallery of Art.

2003 "The resolution of each finished image is like a wary truce that doesn't rule out further hostilities: obviously it is abstract art that allows a range of applications to the world beyond the confines of the picture." Aidan Dunne, Irish Times, 23rd January.

2003 "But the overall effect is of balance, a kind of inevitable status quo being reached in the battle for dominance between the planes of colour." Alannah Hopkin, Irish Examiner, 24th January.

2003 "While the works relate to his earlier, precise, almost architectural work - these paintings have a new vibrancy, a tension and energy and often dramatic colour contrasts." Marianne Hartigan, Sunday Tribune, 4th May.

2004 "The colours are as bold as the shapes themselves..." "The dialogue between the two provides a visual tension, but there is a beguiling stillness at the heart of Walsh's work." Mark Ewart, Irish Times, 3rd March.

2006 "Samuel Walsh has established himself as one of the country's leading exponents of abstract art..." Róisín Kennedy, National Self-Portrait Collection of Ireland, Volume 2, University of Limerick Press.

2007 "The strong washes in the Testa and Phidias series create an almost dappled effect that contrasts with the bold black lines that traverse them. Walsh succeeds in reinvigorating a classical subject by making it his own." Catherine Leen, Sunday Times, 25th March.

2007 "He is not a man for careless use of colour; it is employed with intelligence". "Walsh is an ethical painter in this Kierkegaarden sense, that is, his aesthetic judgements flow from an ethical context". John Daly, 'Selected Work', (catalogue), Hillsboro Fine Art, Dublin.

2007 "Your painting is fresh and independent, and reflects a true originality. It is the originality, independence, and technical excellence of your work that has moved us to invite you here." Invitation letter to take up an artists' residency from the Josef & Anni Albers Foundation, Bethany, Connecticut, USA, September.

2008 "The highly visual text has proovided artists with ample inspiration from Botticilli to Blake, from Doré to Delacroix and Dali. And now Samuel Walsh has joined their esteemed company in his version of The Divine Comedy." Karen Normoyle-Haugh, Circa visual art magazine, Spring, 2008.

2009 "One of the most beautiful is Baetica X, by Samuel Walsh, where delicate pinks and greens delineate a three-tiered landscape, and a network of dark lines makes a sketchy leap into the sky". Gerry McCarthy, Sunday Times, 7th June.

2010 "Samuel Walsh brings precision to everything he does; he is definately not an artist given to spontaneity." "These pictures possess a disicipline and rigour relatively rare in Irish Art, a refusal to compromise or to offer their potential audience any assistance: Walsh expects us to bring the same exactitude to the work as he does. At the same time, he shows how much diversity can be found within his self-imposed restrictions". Robert O'Byrne, 'The Dictionary of Living Irish Artists', Plurabelle Press, Dublin.

2011 "The language of poetry is allusion, of painting in words to try to open the gap to that part of the mind, the part in which feeling and knowing really resides. This is also the stock-in-trade of abstract painting, and in the hands of an artist like Samuel Walsh, as demonstrated in the panoply of this body of work, it is gloriously, and fascinatingly realised". Gemma Tipton, 'In another language', The Coercion of Substance, VISUAL, Carlow.

2011 "Everything in these chimeric images, created over the past four years, some of them while he was a resident at the famous Albers Foundation in New York, is about the subtle glimpses of things known and understood or seen and not understood but full of potential, if we, as responsible viewers, are wise enough to respond to the invitation they offer". Catherine Marshall, Irish Arts Review, Vol 28. No 3, Autumn.

2014 "Sam Walsh has spent four decades looking at the everyday and inventing a language in painting that represents what he sees, primarily in terms of emotional intelligence". Oliver Sears, 'Glance' (catalogue), Oliver Sears Gallery, Dublin.

2014 "His presence in the Irish art world has been a strong one, not only for the integrity of his creative work but also for his active participation in such organisations as the AAI, as a Toscaire in Aosdána, his support for the National Collection of Contemporary Drawing at the Limerick City Gallery, his early participation in EV+A, and his perceptive and courageous critical writing,...." "Always a talented draughtsman, Walsh was challenged to use drawing to define the intangible - the space that flows freely between physical objects in the world whether moving or static." Catherine Marshall, 'Art and Architecture in Ireland', (Volume V, 20th century Art & Artists), Royal Irish Academy/Yale University Press.

2017 'It's animated. It's not like looking at a landscape. Your eye is moving around the whole time. It's like a rhythm to the foot. It's complex, it's layered, it's full of energy and it's very exciting to look at'. Patrick T Murphy describing the work of Samuel Walsh at the presentation of the Savills Art Prize to the artist at the VUE Contemporary Art Fair, Dublin.

2022  'Twenty one paintings and eleven drawings relate to the characters and the places of Homer's epic tale. Walsh's abstraction is calculated compositionally and tonally to evoke the atmospherte of the story, never to illustrate it. The exhibition also underscores the strength of abstraction as a strategy for encounter in an age of images where fixity and its subsequent polemics seem to be the order of the day.' Patrick T Murphy, Director, 'Odyssey' (catalogue), RHA Gallagher Gallery, Dublin.