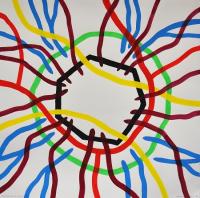 In 2018 Samuel Walsh spent his third artist residency at the Institut fur Alles Mogliche in Berlin, GERMANY. There he started to read Homer's The Odyssey about Odysseus's return to the island of Ithaca after the fall of Troy and his many adventures along the way. This led him to make 10 acrylic gouache on paper drawings in situ and on his return to Ireland he set about making paintings on the same theme. A number of drawings and a single coloured study were added in time with subsequent paintings to follow.

The first painting was completed in late 2018 and called Ithaca, the island home of Odysseus and was first shown at the 189th Royal Hibernian Academy of Arts Summer Exhibition, RHA Gallagher Gallery, Dublin, IRELAND, 2019. This is the start of Homer's story but the story itself is not chronological and moves backwards and forwards in time and for that reason shows a very contemporary style as a piece of writing. This is also the order in which the paintings, drawings and a study were made.

The painting Scherie was shown at the 190th Royal Hibernian Academy of Arts Exhibition, RHA Gallagher Gallery, Dublin, IRELAND in 2020.

The first showing of the 21 paintings, 11 drawings (selection) and one study of The Odyssey by the artist took place at the RHA Gallagher Gallery, Dublin, IRELAND from the 18th February - 27th March, 2022.

See Gallery page for images under the heading The Odyssey.